It is frustrating if you have ever walked up to your vehicle and noticed a dent that was not there previously. It is equally annoying when you accidentally hit something and cause a dent in your car. After all, your car is the second biggest purchase you make after your home. There are several dent repair techniques you can try on your own. 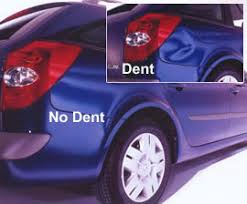 One thing you can do is to use dry ice to remove small dents, especially if you are trying to do hail damage repair. First, get some dry ice. Then, touch the ice to the dent for a few seconds. Be sure to wear gloves to protect your skin from the ice and repeat until the indentation is gone.

If that does not work, you can use the hair dryer method to remove dents. Turn your blow dryer on high and let it blow on the dent for a few seconds. Then, while the spot is still hot, take a can of air and blast it on the dent until it pops out.

Bear in mind that the above to suggestions will only work for small dents. Therefore, if you have more than just a small ding, you may have to hammer out the problem or take a plunger to it. If you are going to use a hammer to get the dents out, be sure that it is a flat-ended hammer, and start by wrapping a rag around a flat piece of metal. Then, put the wrapped metal it on the outside of your car and start hitting at the dent from the underside.

When using this dent removal strategy, you need to be extra careful to make sure that you hit only the underside of the dent and not the rest of the car. If you are not careful, you will end up with a couple of new bumps to deal with. Additionally, you should start from the shallow sides of the dent and then move toward the deeper parts. Moreover, you should also avoid overworking the metal because you can end up stretching it out. Not only that, but this method of removing dents is not recommended if the dent is in an aluminum or plastic part. This is because aluminum can stretch and plastic can crack.

Using a plunger to get rid of dents is similar to using it to try and unclog a toilet. Start by getting the edge of the rubber on the plunger wet. Then, put the plunger over the dent. Establish suction by pressing down on the plunger handle and pull the plunger toward you. You will probably have to repeat this several times before the metal pops back into its proper position. This technique is great for large areas like doors and fenders. However, this is true only if they have only been bent inward. Also, it is important to remember that while it may work on both aluminum and steel, this dent removal method does not work on plastic.

However, if you do not the difference between a plunger and a hammer and have never been handy, it is not recommended that you start with your car. Take it in for professional Paintless dent removal, instead.